SiteGround vs Inmotion – Which is best in Web Page Load Speed 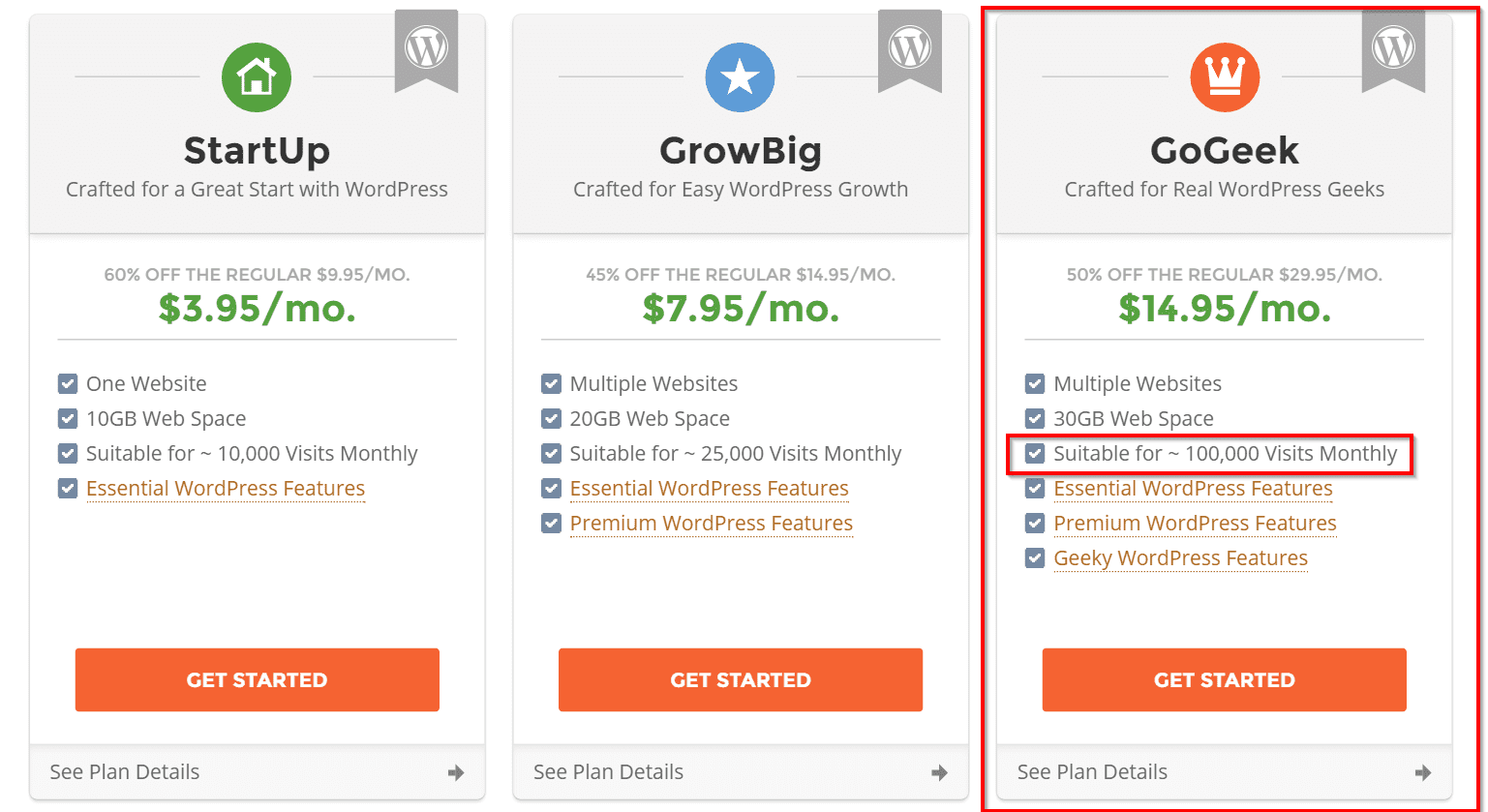 When your start a WordPress blog, you need a domain and hosting service. You can find cheap hosting services and also free ones.  But  what about the average page load time in 2019? You will repent later for hosting your site with slow host.

The type of CPU, RAM, storage, number of static and dedicated IP addresses, bandwidth, resources, SSD hard-drives  etc all play a major role in the performance of your sites.

In this post we are going to see Inmotion hosting vs. Siteground web hosting differences. This will give you clarity on which host to choose in 2019.

One of the key parameters for a good hosting is – site to load quickly. All visitors around the world should have access to your website pages and resources with lightning agility.

There should be no downtime of servers and loss of your website resources. You need timely backups, so in case there are some troubles handling your WordPress site, the hosting should be able to stand up.

I would like to compare the Inmotion Hosting (IMH) VPS-1000S or (VPS-1000HA-S currently) and SiteGround (SG) GoGeek plans in terms of web page loading speed, mainly for WordPress sites. I tested the same web pages without any modification on both the hosting to get a comparison of loading pace.

For the detailed features of both these plans, you can refer the following pages.

First of all, I would like to talk about the comparison of prices between these two plans. Though both the hosting services talk of discount plans, the IMH-VPS-1000S plan is generally $29.99/month on first purchase. The SG-GoGeek plan is generally $14.95/month on initial purchase. 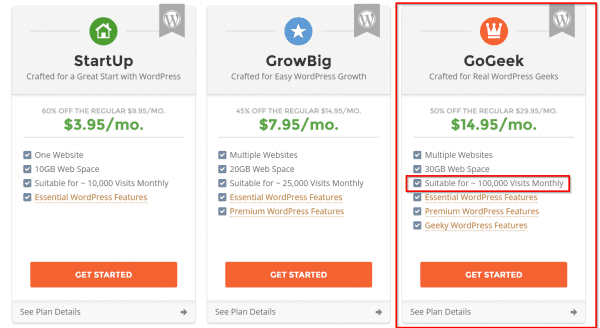 Just like any hosting plan, the renewal prices are higher in both the cases. For IMH-VPS-1000S plan you need to spend $44.99/month compared to SG-GoGeek plan of $29.95 for renewal of hosting services.

Another major difference between both the hosting plans is that GoGeek clearly mentions on its web hosting plan page that its GoGeek plan is suitable for 100k visits per month (approx).

But IMH does not give any clear details about pageviews or visits for its VPS plan. I have several times talked with their technical support, but they were reluctant to give a picture.

What is the comparison of Storage

But in comparison of disk spaces, IMH gives a higher fault tolerant disk space of 60GB for its VPS-1000S plan, compared to the GoGeek plan which gives only 30GB. So if you are a media freak or photography enthusiast, involved in uploading big files like videos, photoshop files etc. than you are on a limited budget for GoGeek.

But generally, WordPress bloggers use different author resources (both free and paid) to upload their media files. These services provide much higher disk space. But they differ in the speed of transfer and amount of bandwidth. So it’s highly impossible to compare such media usage services.

The test web page in this case-study was –

For both the cases, I have taken the same web pages. Also I have conducted my case-study in 3 stages.

I just used the hosting services only. These include the default resources and benefits that come up with these plans. But in both the VPS-1000S and GoGeek plans, I didn’t use their cache mechanisms. Both the hosting services provide their own caching methods, which definitely improves the page loading speed.

I used the default hosting with the W3TC plugin. This is to observe on how the cache techniques provide benefit to the WordPress user or blogger, along with the resources provided by the hosting plans. By default, W3TC very much reduces the page loading time, as it caches many resources including static files.

I used the hosting plan and W3TC and Cloudflare (CF) free service. As you know CF is a CDN technology, which has its servers at multiple locations around the world, which caches the static resources and files, which can be quickly accessed by visitors near to that location.

So these client locations mimic, as though the page is loading from that particular location. The GTmetrix provides only the Vancover, Canada location as the testing service for free.

Using the SiteGround server, these results were produced, with other things remaining identical. I also used the same server locations for Pingdom tests in both the cases.

As you can see for the NewYork server, the SiteGround server reports much less page size compared to the Inmotion Hosting VPS server. The main difference is in the page loading times for this particular server. I have to mention here, that in both the cases, the servers were located in United States.

So naturally, it is expected that the page load times from US server testing locations will be less. But still SiteGround reports less web page speed times. This can be attributed to the different type of configuration used by both the hosting services in their respective plans.

But the exact reason, why SiteGround reports much less page load times for NewYork serves can only be answered by their technical team.

As for the Dallas server, the SiteGround server reports a 1 sec less average page load time compared to the Inmotion Hosting VPS server. There is also a reduction in page size and number of requests.

As for the Melbourne server, the average loading speed of the test web page has lot improved in the case of SiteGround compared to Inmotion Hosting. There is a reduction of 1 to 2 seconds for different repeated tests.

But the interesting aspect is here.

When I tested the same web page after emptying the browser cache with GTmetrix (another speed loading testing tool), the page loading times were found to be the same. So this test server and testing tool, do not show any variation MUCH for both SiteGround and Inmotion Hosting.

The results with Inmotion Hosting server were as follows for different client locations.

As you can see the tests were repeated thrice or four times, to see the average page load times. Also the loading speed on first time test, were not taken, as initially the servers will try to cache the web pages. You should always check with these tools on second or third time. Also, checking the page loading times repetitively gives an average time to compare.

The results for the SiteGround server were as follows.

As you can see the above tables, you can clearly find the results. After using the W3TC plugin, the Inmotion Hosting VPS server page loading times drastically reduced. You can see a change of 1 to 2 secs in repetitive tests from different server – client locations.

Also the difference between Inmotion Hosting and Site Ground page loading times, for not much different when using the W3TC plugin.

Though in SiteGround case, the page loading times have reduced slightly like in milliseconds to 1 sec in different client locations. But the above conclusion is an interesting fact from this case-study.

The GTmetrix test results were not that much conclusive. Even after reiterating the tests, the page load times were different in each case. So it was much difficult to use this testing tool to compare the page loading speeds for SiteGround GoGeek and Inmotion Hosting 1000s VPS plan.

The results in the case of Inmotion Hosting were as follows –

In some cases, you can omit the first result, as it was taken for the first time loading.

For the SiteGround case, these were the test results.

As you can observe the comparison in the case of NewYork server, the SiteGround system was 0.4 secs faster than the Inmotion Hosting server. In the Dallas case, there is a minute reduction of 0.2 secs in the case of SiteGround compared to IMH-VPS-1000s.

The Melbourne client location test conducted for IMH, didn’t give a correct average page load time. So though the SiteGround server shows less time for this location, we cannot give conclusive evidence on this test location.

As usual for GTmetrix testing tool, the page loading speeds were different with different iterations. Only the GTmetrix technical team should be able to answer why these discrepancies occur.

If you are using the W3TC plugin, there is not much variation.

Using Cloudflare and W3TC plugin, you couldn’t find much variation in page loading times in both the hosting plans i.e VPS-1000S and GoGeek.

A VPS server is supposed to be faster and should give more quick page loading times. But that’s not the case here, as seen. Also SiteGround does not boast about its plan as VPS hosting. It calls this as a specialized hosting for WordPress sites.

So finally, I recommend SiteGround GoGeek plan compared to Inmotion Hosting VPS 1000s plan, price wise and performance wise also, especially for WordPress sites. This can be seen from the above tests.

Please comment in the section below, if you have any opinion on the above case-study. Share this article, if you like it. It took me about 3 days to write this article and I enjoyed the whole process.

3.5
04
0 comments… add one
We use cookies to make sure we give best experience on our blog. If you continue to use this site it means you accept cookies and EU privacy law.OkEU GDPR Policy Page